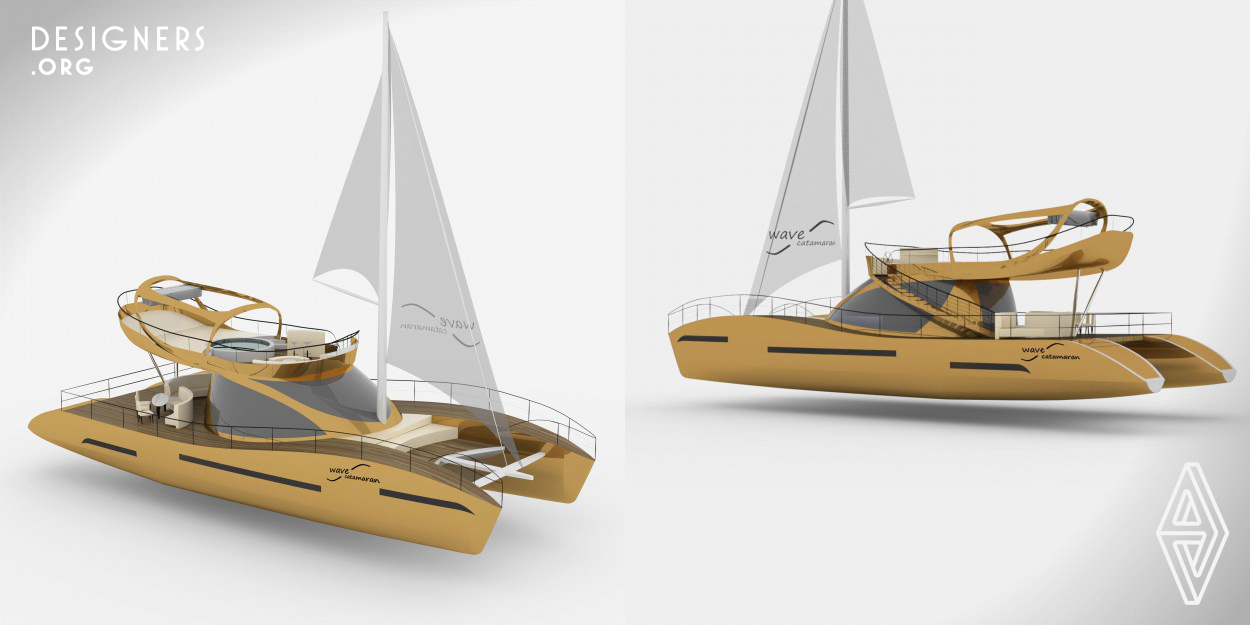 Thinking about the sea as a world in a continuous movement, we took the “wave” as a symbol of it. Starting from this idea we modelled the lines of the hulls which seem to break themselves to bow. The second element at the base of the project idea is the concept of the living space that we wanted to draw in a sort of continuity between interiors and exteriors. Through the big glass windows we get an almost 360 degree view, which allows a visual continuity with outside. Not only, through the large glass doors opened life inside is projected in the outdoor spaces. Arch. Visintin/Arch. Foytik 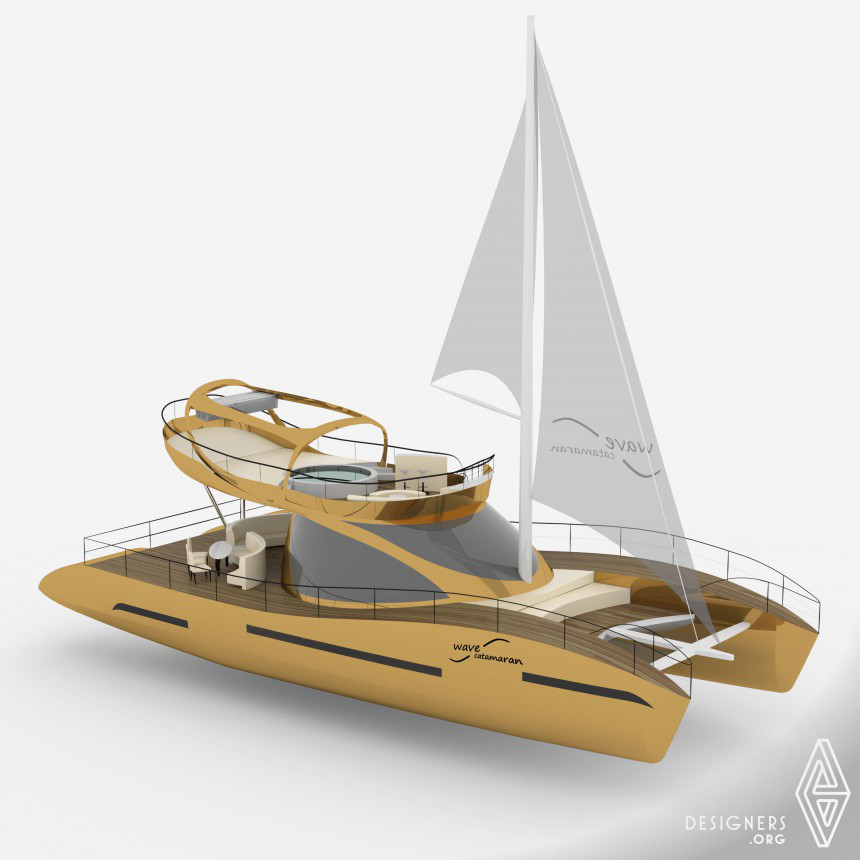 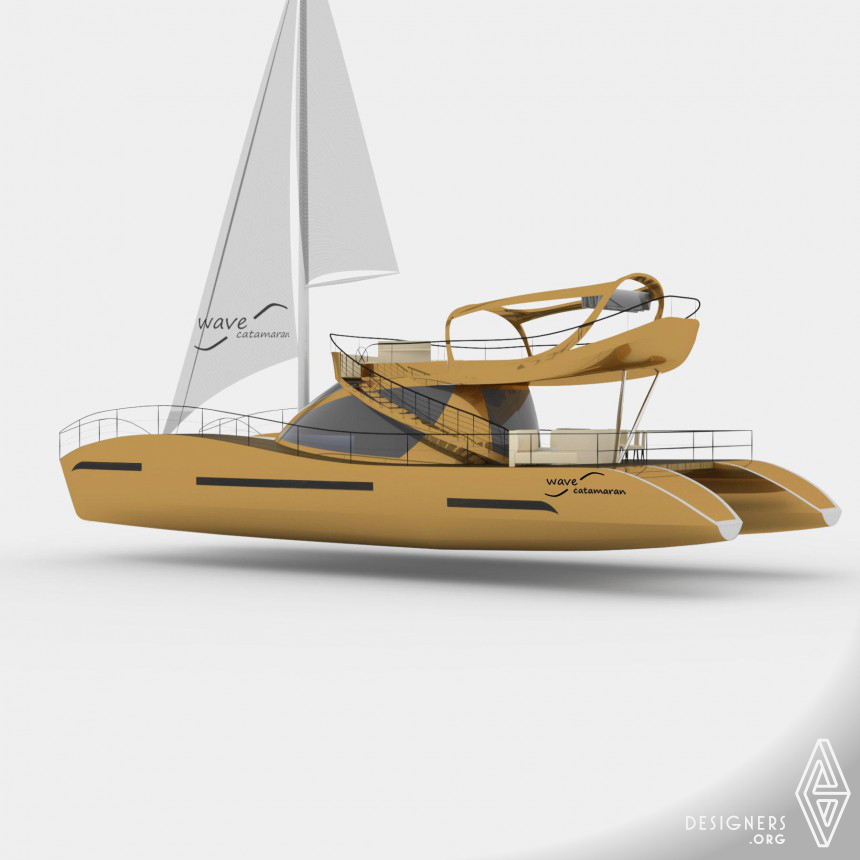 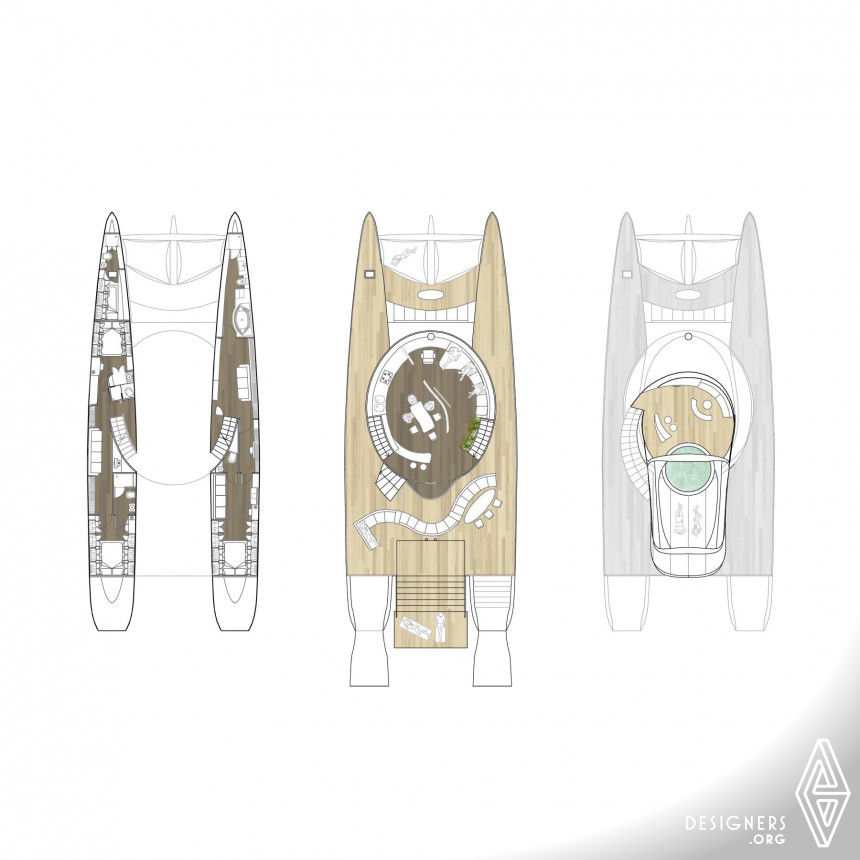 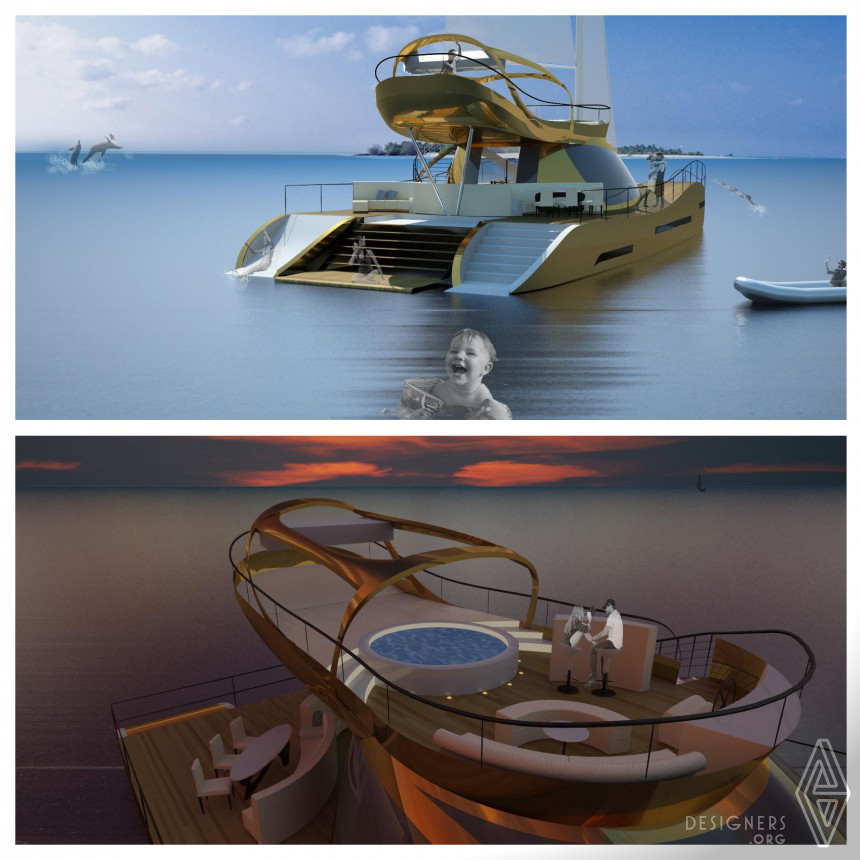 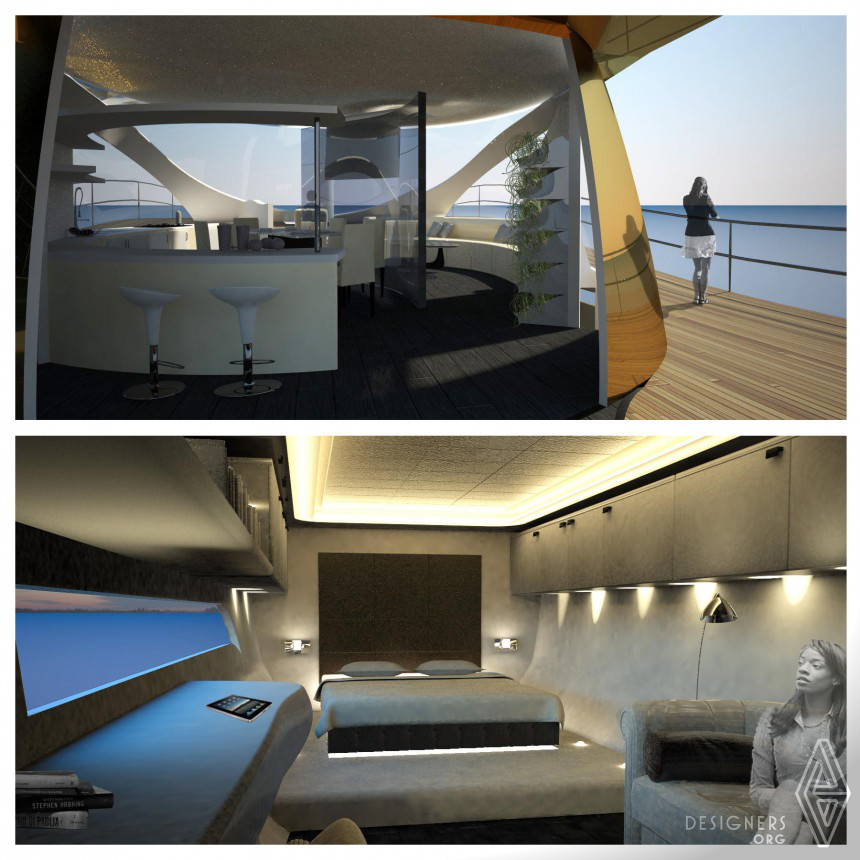 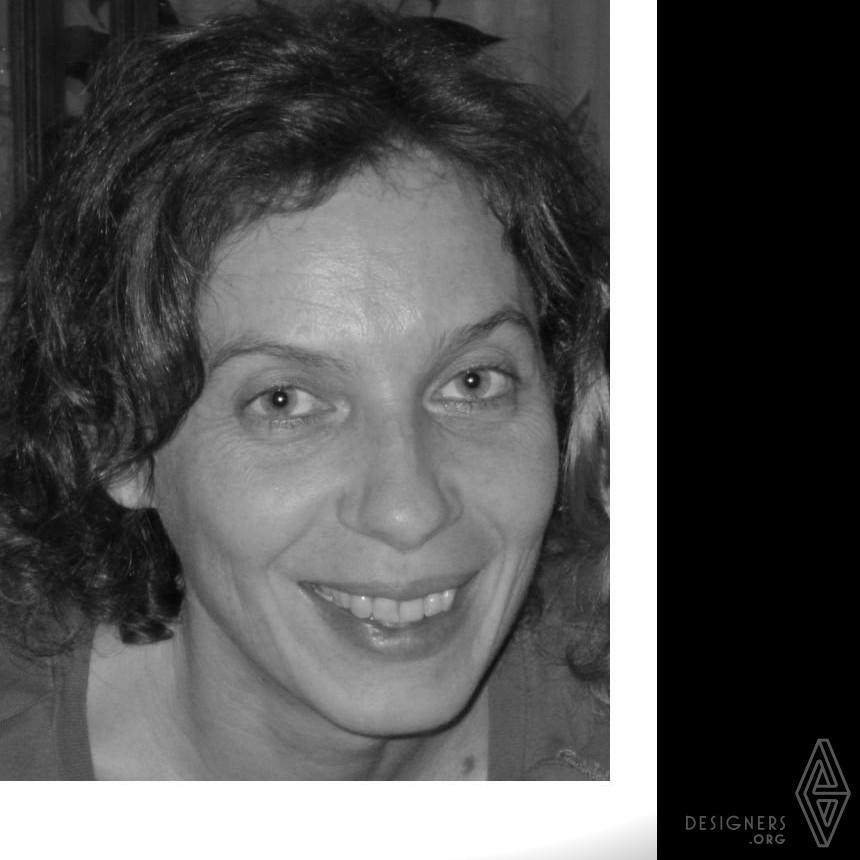 What is the main principle, idea and inspiration behind your design?
Thinking about the sea as a world in a continuous movement, we took the “wave” as a symbol of it. Starting from this idea we modelled the lines of the hull which seem to break themselves to bow.
What has been your main focus in designing this work? Especially what did you want to achieve?
The project starts from the analysis of today typology catamarans design. In most cases we have pointed out that the exterior design is too much simple, almost skin-deep and without fluent line, unlike the luxurious and elegant interiors. For this reason we thought to give a different answer to the current naval market drawing a catamaran 24 metres long with a sporting, but at the same time elegant, design.
What are your future plans for this award winning design?
Our expectations are to find new job opportunities, to establish collaborations with experts in the field. We would like to see this project built.
Why did you design this particular concept? Was this design commissioned or did you decide to pursuit an inspiration?
We want to offer an innovative product to the market of catamarans, for this reason we decided to pursuite our idea.
Is your design being produced or used by another company, or do you plan to sell or lease the production rights or do you intent to produce your work yourself?
We are looking for people interested in developing the production process: engineers, naval shipyards, clients.
What made you design this particular type of work?
We want to offer a new concept of catamaran both as exterior design and as a new way of living the cruise feeling immersed in the sea.
Where there any other designs and/or designers that helped the influence the design of your work?
No there aren't. This project is an idea that we developed by ourselves.
Who is the target customer for his design?
The project is aimed to the lovers of the sea who want to live the cruise maintaining a direct relationship with it at the same time not renouncing to aspects such as comfort, entertainment, privacy, luxury, elegance.
What sets this design apart from other similar or resembling concepts?
The main characteristics of “Wave Catamaran” are: 1. The concept of the living space that we wanted to draw in a sort of continuity between interiors and exteriors. Through the big glass windows we get an almost 360 degree view which allows a visual continuity with outside. Not only, through the large glass doors opened life inside is projected in the outdoor spaces giving a continuity in the use of the yacht. 2. The flowing, sinuous lines that propose both in the design of the hull (and superstructure) and in the design of the furnishings. 3. The bronze colour of the exterior hulls and superstructure designed to propose a new chromatic boat line. 4. The use of materials used in civil architecture: the interior walls are coated with white plaster properly treated. 5. The “green fall” inside the living room: some plants are grown in stacked pots by hydroculture and create a kind of vertical garden. 6. The choice of some items to ensure the fun: a movable foot-board hidden in the floor stretches out toward the sea creating a small beach (under the board there is the tender park) and the slide hidden in the transom.
How did you come up with the name for this design? What does it mean?
The name derives from the main idea of the project: the wave as a symbol of the sea’s movement.
What is the role of technology in this particular design?
Technology played an important role in designing both interiors spaces (spa, tv screen to disappear into the ceiling, green wall,...) and exterior ones (hull, glass stair,...).
What are some of the challenges you faced during the design/realization of your concept?
The main challenge was of begin without a structural design. The difficulty was designing a feasible hull that calls to mind the sinuous lines of the wave.
How did you decide to submit your design to an international design competition?
We have decided to participate in the competition for professional growth, comparison with other designers, to find new job opportunities and advertise our activities.
Any other things you would like to cover that have not been covered in these questions?
We want to achieve the customer’s dreams. So our slogan is " YOUR BOAT AS YOU DREAM IT!"